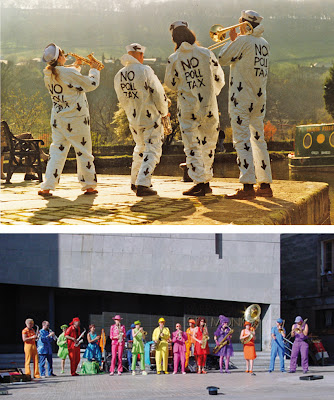 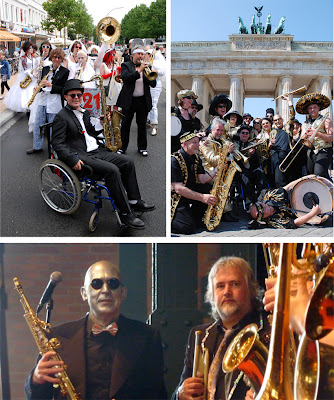 In post-hippy 1980s Britain, Margaret Thatcher’s policies provoked a wave of protest across the country. There was much to protest about: nuclear weaponry, racism, attacks on trade unions, cuts in public services...and the dreadful Poll Tax.  Musicians around the country, from self-taught beginners to trained professionals, formed bands to join the growing protests.

In Bradford, a few Peace Studies students and some members of CND got together to make a joyful noise on Peace marches, with  a drum, a clarinet, a flute, a couple of saxophones and occasionally an accordion.  Suddenly a ‘streetband’ had appeared, cleverly called “The Peace Artistes”!


Street brass band traditions have flourished in many cultures, from Colombia to the Balkans and from Kenya to India and the Far East.  Stimulated by dominant colonial cultures, they have often subverted them too.  Street bands are strong, rhythmic and functional, playing for processions, dances, civic occasions and rituals - like New Orleans bands, which were a key influence in the birth of jazz.

In the 1980s and 90s, people in the UK could absorb many different cultures of music making.  The emphasis on co-operative group music was popular - in the Brazilian-style samba bands that resounded throughout Britain, in community choirs and African-style djembe groups, and in the enthusiasm of adults who found that learning to play a saxophone could quickly become a social and political activity!  In a real sense, this approach to music allowed a band to demonstrate that its performance could be “greater than the sum of its parts”.

The Peace Artistes’ repertoire and style are inspired by these rich traditions.  Whilst drawing on musical influences from South Africa, Central and South America, jazz, reggae, the music of central and eastern Europe, cabaret and pop, they also add something special in their distinctive costume and performance!